As different types of natural disasters occur with greater frequency across the United States, an increasing number of people are wondering what is covered and what is not covered by homeowners insurance. When it comes to floods, earthquakes, tornadoes and hurricanes, most people now know that they typically need to purchase special coverage policies for each of those perils, but what about sinkholes?

Sinkholes are ground cavities that result from the concentrated deterioration of underlying layers of porous rock. The softening that leads to sinkholes is caused by the oversaturation of soil in tandem with rock erosion in select areas. Sinkholes are usually the result of ground activity that rapidly advances from small pockets that grow into large cavities. In some cases, the problem is foreshadowed by cracks at the surface level. Some of the more dangerous situations are indicated by slants and cracks in overlying trees and structures.

Sinkholes are hard to detect and even more challenging to predict. While the problems leading up to a sinkhole can take months or years to accumulate, the actual event will typically occur in a matter of seconds. In worst-case scenarios, sinkholes swallow up large pockets of land and drown houses, trees and vehicles. Sinkholes have also caused animal and human fatalities. In recent years, the problem has drawn increased attention in the U.S. due to a growing number of occurrences in some of the more sinkhole-prone parts of the country.

Sinkholes are caused by cavities below the Earth’s surface. The areas that are most prone to such developments sit on a type of topographical development known as karst, which forms when soluble rocks such as dolomite, gypsum and limestone dissolve and form cavities below ground level.

In developed areas that sit on soft soil, the occurrence of sinkholes can also be spurred by leaky plumbing systems. As water leaks into the soil, the dirt can soften and destabilize the ground around structural supports. This, combined with the formation of cavities in soluble rocks, can lead to the sudden implosion of the Earth’s surface in localized pockets.

Sinkholes can also form on overworked grounds that have been the scene of scrapped prior developments. If an earlier building burned to the floor or was gutted and imploded after a flood or earthquake, the current structure on that spot could sit on a weak or compromised body of soil. This could cause the underlying ground to buckle and sink without warning, especially if the ground has high levels of karst.

Sinkholes are sometimes the side effect of mining and construction activity. If mining occurs near an area developed over porous rock, it could offset the balance of the surrounding land and destabilize the foundations of houses and other buildings. Likewise, new constructions impact the balance of surrounding structures, especially if the development teams responsible lose sight of the natural flow of water in the ground below.

In worst-case examples, the establishment of new building foundations can offset the drainage of groundwater and reroute streams into concentrated spots. After years of saturation, the ground could be rendered too soft to support the buildings overhead.

Are Sinkholes Covered by Insurance?

It must be understood that most insurance companies grant policies to homeowners expecting claims will be few and far between. In areas that have a high risk for natural disasters, insurance premiums tend to be higher and more stringent. If you live in an area where excluded perils like earthquakes, floods and sinkholes are reoccurring problems, you are strongly advised to get additional insurance to cover these hazards.

In some areas of the country where sinkholes have been a reoccurring problem, homeowners insurance has been extended to cover the problem. Florida, for example, is home to various providers that offer sinkhole coverage in standard homeowners policies. Tennessee is another state that now offers sinkhole coverage as an optional add-on for policyholders. In Pennsylvania, however, you still need to purchase a separate policy.

If your car is swallowed by a sinkhole, you could have the cost of the vehicle covered if you have a comprehensive auto insurance policy. A comprehensive policy is designed to cover all the external hazards that can harm a vehicle, such as fallen trees, thrown rocks, vandalism, hail and natural disasters.

Is a Repaired Sinkhole Home Safe to Live In?

If a home sits on the site of a repaired sinkhole, the underlying ground will have undergone an extensive series of filling and stabilization operations. The techniques employed to fill a sinkhole vary depending on the size and depth of the hole and the nature of its originating factors. If a hole was formed due to cavity formation in the ground underneath the property, emergency technicians will typically fill the hole with porous concrete. This restores the solid bedrock of the ground beneath the property and also facilitates the natural flow of water that the once-intact porous mineral rocks used to provide.

In less urgent scenarios, such as when a well-sized sinkhole forms on a property, emergency engineers will sometimes employ grout injections and other simpler methods to stem the problem. On properties where sinkhole repair work is required, the completed work must be approved by the home insurance company that covers the property. Therefore, homes that sit over repaired sinkholes are generally safe to inhabit.

In cases where the sinkhole was due to human error or odd catastrophic causes, such as poor foundations in the home’s construction or destabilization in the ground caused by a flood or earthquake, the home will probably be safe once repairs are made to the ground and the damaged parts of the home. However, if a sinkhole was caused by natural activities within the Earth’s soil, such as karst cavities formed by drainage issues and limestone depletion, those same natural causes could gradually reoccur in the future.

How Can I Protect Myself From Sinkholes? 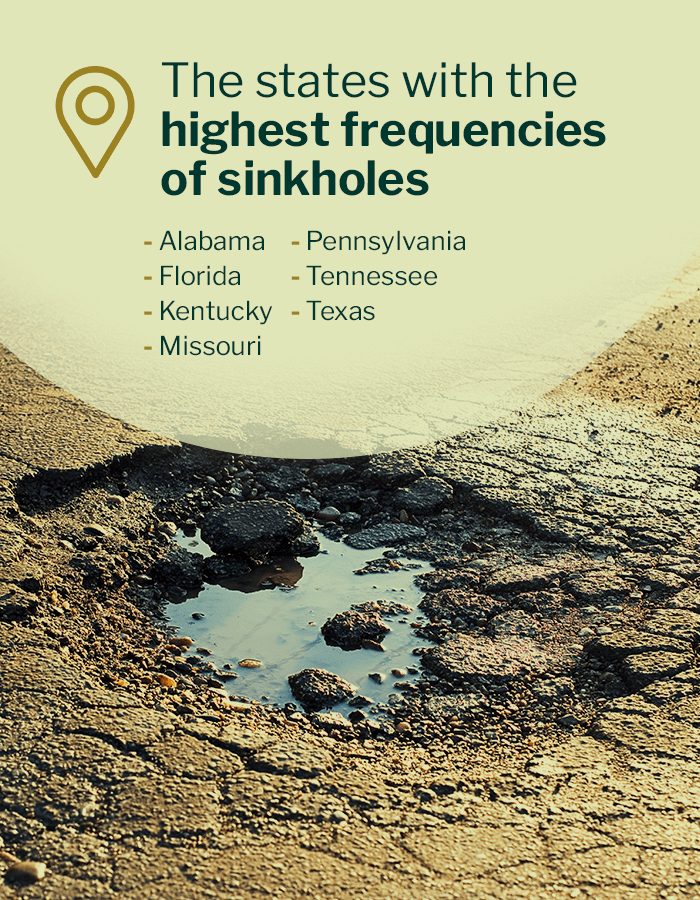 Sinkholes are most likely to occur in areas that sit on limestone or other soluble rock, such as dolomite. According to the U.S. Geological Survey, 35 to 40% of the nation’s underlying soil consists of evaporite rock, such as salt and gypsum. The states with the highest frequencies of sinkholes are:

Florida — a state largely built on limestone — has been the site of numerous sinkhole disasters that have swallowed houses and claimed lives.

There are several ways that you can go about determining which areas are more at risk of sinkhole formation. If an area has been the site of prior sinkholes, chances are the town is built on a porous bed of rock that has already dissolved in certain places. If the area sits on soft land that has been destabilized by flooding and tremors, the weakened ground could be more vulnerable to cavity formation.

If you are scanning a community in hopes of purchasing a property, you could always check with the local city council to see whether the area has a history of sinkholes. You can also search for this information at local colleges or the town library. Moreover, state mapping sites by the Department of Conservation and Natural Resources provide a means to pinpoint areas that are prone to bedrock activity.

Sinkholes are nearly impossible to predict and virtually unpreventable. That said, there are warning signs that might indicate that your home is teetering on unstable ground.

If there are cracks along the foundation of your home, the underlying ground could be caving. You might have a situation where the porous rock disintegrates in slow, gradual amounts. If a crack forms vertically along one of your walls and no tremors have been recorded in your area, this could be the result of cavity formation and destabilized foundations.

A house that sits on a forming sinkhole can somewhat feel like a slanted ship. If your doors seem slightly ajar when you open and close them, this could indicate that your home is on shaky ground. Likewise, if items have slipped off your tables yet none of the legs have lost their tightness or length, your home could be in danger. Remember, when the Titanic first started to fill with water, sliding glasses on tabletops were among the first warning signs on the passenger deck.

One of the most dangerous signs of a pending sinkhole is slanted trees. If a tree in your yard appears more slanted than before, the ground below could be weakening or softening under the roots. If you also notice cracks at the roots, that would be another indicator of ground activity. In any case, your property could be in danger, whether the tree leans in the direction of your house, vehicles or power lines.

Perhaps the most obvious sign of sinkhole activity is when a crack or void forms on the ground around your house. Faults like this are easiest to spot in swimming pools and on driveways and other paved areas, but they can also start on lawns and gardens. If you notice any fault formation, report the activity immediately, as your property could be in grave danger.

What to Do If Your Home Develops a Sinkhole

If a sinkhole develops on your property, report the activity to your insurance company. Depending on your range of coverage, you might be insured for the cost of soil inspection and testing. In any event, you should alert your insurer to the situation as soon as possible.

As you wait for an answer about your property’s fate, make arrangements for alternate accommodations. If the evidence consists of slanted doors and major wall cracks, evacuate your home immediately. If the impact is minor and removed from the home itself, you might choose to stay, pending the results of the test. If the tests conclude that your home is not in danger, watch for further developments.

If your property has shown signs of sinkhole activity before or such events were reported near your home in the past, proceed with caution on home-improvement undertakings. The problems that lead to sinkholes can be exacerbated when you place new structural foundations into the affected soil, as this can reroute water toward concentrated spots and lead to oversaturation.

Since 1955, homeowners and vehicle owners in Perry County have come to Reisinger Insurance Agency, Inc., for quality policies on home and auto insurance. Whether your home is small or large, old or new, we understand that each homeowner’s needs are different. Our representatives work with each applicant to determine the best policy for the property in question. Contact us today to learn more about our policy options and get a free quote.

We want to work with you!

The information expressed on this website is meant to help educate our viewers. You should always consult an insurance professional to find a plan that benefits you or your family best.